The Curious Appearance of Agloe, NY 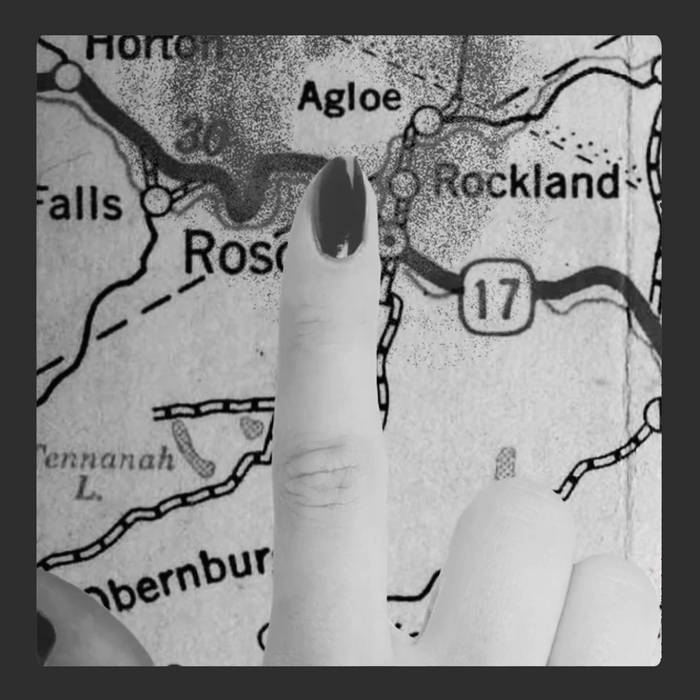 YA's Grove KUDOS!
I listened to all 9 songs a couple of times the last three days and, I feel and think they all are beautiful!
I love your work thoroughly, and it makes me happy that there are guys who create genuine beauty! Thank you!
BIG HUGZZZ... (☆`▽´☆ϡ

Agloe is a census-designated town in upstate New York. It’s just up the road from Roscoe. You’ll see signs for it on the highway, but you can't really visit it. That’s because only kind of exists.

Agloe is an example of a copyright trap-- a fake location invented by a map company to snare copycat mapmakers. If an enemy company were to plagiarize a map and copy an illegitimate city, the original company has a near certainty in winning ensuing legal cases. Every map has several of these: from small “trap streets” in large towns to nonexistent geological features. (Google Earth has gone as far as to create an entire fake chain of islands in the South Pacific.)

In 1937, the General Drafting Company created a rote copyright trap, the town of Agloe, New York. The trap worked like a charm— in 1962, Rand McNally proudly included Agloe on their American Road Atlas. However, our story takes an awfully strange turn here, for Rand McNally had an awfully good defense: the town of Agloe appeared on state census data.

After a bit of research, General Drafting found that in the early 1950s, a solo driver made his way through the town of Agloe, visible on his backseat atlas. Finding nothing but seemingly unclaimed land, he built a general store. Within a month, a family moved in just down the road. Over the next half a century, Agloe would continue to grow, eventually to include a gas station, a church, a park, a fishing lodge, a municipal building, and several houses. People were moving into a town that didn’t technically exist.

I first read this story in early 2014 prompted by its sudden (and awkward) removal from the Google Maps database. Today, if you take a drive up to Agloe, you’ll find a bunch of abandoned buildings, overgrown foundations, and a complete absence of people. A town that never existed came into being, and vanished just short of seventy years later. Nobody’s exactly sure why.

Told through composition, field recordings, animation, and historic audio samples, “The Curious Appearance of Agloe, NY” is a project about the oddities of copyright law. It’s a short meditation on hometown identity, kitsch Americana, and the bizarrely political implications of cartography. We sincerely hope you have as much fun listening to this project as we had making it.

All songs composed by Kirk Pearson, except “Ode to the American Village” by Hayden Arp and Kirk Pearson, “Americana Falls” by Julian Korzeniowsky, “The Ballad of Agloe, NY” by Alex Sturbaum, and all quotes, samples, and other derivative works outlined at the end of the credits.

All songs produced and engineered by Kirk Pearson, except “Ode to the American Village” by Hayden Arp and Kirk Pearson.

*Kirk Pearson* (Composition, Mandolin, Strings, Electronics, Field Recordings) is an electroacoustic composer and researcher. His compositions have appeared on NPR, the BBC, TEDx, and PBS. He presently studies composition and film at Oberlin College. This is his fourth record as director of the collaborative digital ensemble BIT.

BIT is an ever-changing digital artistic collaborative, built by over seventy musicians, producers, programmers, and visual artists in ten countries. The first time many of the collaborators ever meet is on record.

In order of appearance:

*Nick Dunston* (acoustic bass on “A Spark Glows” and “A Glow Fades”) is a Brooklyn based composer and bassist who goes to the New School for Jazz and Contemporary Music. Dunston is involved with multiple projects in the New York new music scene, as well as his own projects. He loves thai food and waffles, so if you ever see him, please take him out for thai food or waffles, depending on the time of day. This is his fourth record with BIT. nickdunston.com

*Brendan Smith* (Voice of the General Drafting lawyer, vocals on “A Spark Glows” and “Capillary Flow”) studies musical theater at Ithaca College and sings with the New York rock group Jacobins (jacobinsmusic.bandcamp.com). This is his second record with BIT.

*William Passannante* (Voice of The General Drafting Audio Encyclopedia) is an actor, comedian, aspiring attorney, and graduate of Oberlin College. He likes bugs. This is his first record with BIT.

*Hayden Arp* (Production and Composition on “Ode to the American Town”) composes music for listening and hails from Alexandria, Virginia. He currently studies at Oberlin Conservatory (www.haydenarp.com). This is his second record with BIT.

*Vanessa Grasing* (Narrator, vocals on “Ode to the American Town” and “A Glow Fades”) is a New York-based singer/songwriter currently studying studio composition at SUNY Purchase. Her latest multimedia piece, GREY, explores issues of feminine identity and consent on American college campuses. This is her third record with BIT. nessaband.bandcamp.com

*Jonah Bobo* (Guitars) is a musician and actor from Roosevelt Island, NY. He produces music under the aptly named moniker, Monochoir. This is his fourth record with BIT. monochoir.bandcamp.com

*Ella Hester* (Voice of the General Drafting Cartographer, Vocals and acoustic bass on “Mapmaker’s Lament” and “I Was Born in a Paper Town”) is a vocalist, bassist, and Brooklyn native soon to be in Chicago. Favorite foods include eggplant, ginger, pineapple, and Popeyes. This is her first record with BIT.

*Anna Marfleet* (Voice of the General Drafting Cartographer, Banjolele, Vocals on “Mapmaker’s Lament” and “I Was Born in a Paper Town”) is a singer, songwriter, and banjolele player who splits her time between Morningside Heights and the treacherous backwoods of upstate New York. Will work for $5 an hour or complimentary nouns. This is her first record with BIT.

*Sonia Bloom* (Voice of the General Drafting Cartographer, Vocals on “Mapmaker’s Lament” and “Força Da Imaginaçao”) is a sophomore at Oberlin College. She enjoys harmonizing and embracing her inner frisbro. This is her first record with BIT.

*Daniel Wenger* (Trombone on “Mapmaker’s Lament) is a jazz trombonist from Washington Heights. He presently works as both a brass player and gardener, and is a music student at Ithaca College. This is his first record with BIT.

*William Bolles-Beaven* (Bass on “I Was Born in a Paper Town”) is a second year composition major at Oberlin Conservatory. In the past he has gone to the Interlochen Arts Camp, Boston University Tanglewood Institute, and soundSCAPE music festivals for composition.This is his first record with BIT.

*Griffin Jennings* (Guitars on “I Was Born in a Paper Town”) is a songwriter, guitarist and experimental composer attending Oberlin Conservatory. He is currently working on an album loosely based on the life and works of Maurice Sendak with friend and collaborator Hayden Arp. This is his third record with BIT. gjennings.bandcamp.com.

*Julia Ofman* (Voice of a paper town inhabitant, vocals on “I Was Born in a Paper Town” and “Força Da Imaginaçao”) is a born and raised New Yorker, part-time musician and full time cheese eater. She recently graduated from Bates College in Lewiston, ME. Please hire her. This is her third record with BIT.

*Emma Morcroft* (Voice of the Agloe founder, vocals on “Força Da Imaginaçao”) sings for the rock band “Lady and the Tramps.” This is her second record with BIT.

*Terrible* (Electronic percussion, remix of “Força Da Imaginaçao”) started for shits and giggles with a J-Lo sample. It's a celebration of fun and derivative sounds and liking music because it sounds good even if it doesn't have a point or an easy label. Terrible is Max Schaffer and all of his friends and everyone he loves, and anyone who cares enough to read this bio. This is his first record with BIT.

*Isabel Hanson* (Voice of the Agloe inhabitant, vocals on “Força Da Imaginaçao”) is a rising senior at Williams College studying Anthropology and Public Health. She sings and plays the flute whenever there’s occasion to. When she’s home on Long Island, she sits in with The Huntingtones contra dance band. This is her first record with BIT.

*Alex Sturbaum* (Voice of the paper town inhabitant, guitar and vocals on “The Old Paper Corners”, writer and performer of “The Ballad of Agloe, NY”) is a multi-instrumentalist, and folk dancer from Cincinnati, Ohio. His extensive work with his bands Gallimaufry and Countercurrent has earned him near celebrity status in the American contra dance community. He presently resides in Seattle, Washington. This is his first record with BIT. www.gallimaufrymusic.com

*Will Lord* (Voice of the paper town inhabitant, vocals on “The Old Paper Corners”) started writing songs at the age of twelve. His music can be classified as vocal music from a new perspective, drawing vocal techniques and timbres from all over the world and redefining the contexts in which they are usually set. He currently studies opera at Portland State University. His album, Sub-Human will be released in August, 2015. This is his third record with BIT. www.willlordmusic.com

*Caroline Kuhn* (Voice of the paper town inhabitant, vocals on “The Old Paper Corners”) is a NYC-based singer and composer, and one third of the folk group The Ladles. Kuhn currently studies contemporary improvisation at New England Conservatory. This is her fourth record with BIT.

*Cole Blouin* (Narrative for "The Old Paper Corners") is a multi-stylistic guitarist, songwriter and occasional electronic musician from Maine, currently studying at Oberlin College. Although it's been a while since he's had any significant release, you can find his experiments and live tracks at www.soundcloud.com/coleblouin. This is his third record with BIT.

*Damon Smith* (Piano on “The Old Paper Corners”) plays with the New York rock group Jacobins. He studies with the contemporary improvisation division of New England Conservatory where his music has been critiqued by the likes of Elvis Costello and Brendan Small. (jacobinsmusic.bandcamp.com). This is his fourth record with BIT.

*Julian Korzeniowsky* (Composition of “Americana Falls”) has written original music for the American Composers Orchestra, The New York Philharmonic and Ethel String Quartet. He is a recent graduate of New England Conservatory. He can be reached at jfelix92@gmail.com. This is his fourth record with BIT.

Four ambient field recordings are used throughout the album, intended to mimic Agloe's environment across four seasons. These recordings were made in LaGrange, OH (May 2015), New Paltz, NY (August 2011), Oberlin, OH (September 2014), and Concord, Massachusetts (January 2014).

“Ode to the American Town,” and all subsequent ideas of the city as organism are based on selections from D'Arcy Wentworth Thompson’s “On Growth and Form,” as well as the podcast segment “It’s Alive?” from the “Cities” episode of “Radiolab,” produced in 2008.

“Mapmaker’s Lament” quotes “Tain't Nobody's Biz-ness if I Do“ composed by Porter Grainger and Everett Robbins.

“Força Da Imaginacao” quotes “Força Da Imaginacao,” composed by Beth Carvalho, samples “Light Will Keep Your Heart Beating in the Future” by Mike Doughty, as well as a segment from “Translation,” an episode of Radiolab, distributed by NPR, voiced by Robert Krulwich, and produced by Jad Abumrad.

Special thanks:
Dan Lewis, who introduced me to the story of Agloe through his newsletter, "Now I Know."

Julian Korzeniowsky, a wonderful friend and collaborator, who assisted with the development and narrative for this project.